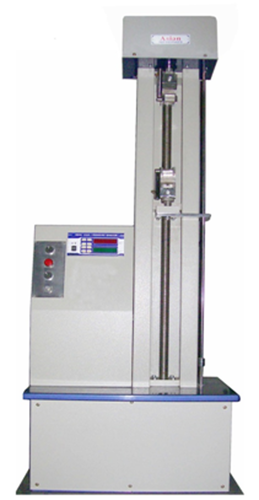 The â€œASIANâ€ Tensile TestingMachine provide a relatively inexpensive way for determining the tensilestrength and elongation of variety of raw materials such as rubber, leather,fabric, plastics, Belts, wires etcetera. They are based on constant rate oftraverse principle in which one end of the test specimen is held in astationary grip, while the other end is made to move at a known fixed speedwith the help of motor, gearbox and screw arrangement. The load exerted on thestationary grip is sensed by a load cell and indicated by a digital loadindicator. The controller is microprocessor based and has the facility of overload protection, peak hold and auto calibration. The load directly indicated inkilograms or Newton.

The elongation ofthe test specimen is measured on a digital indicator fixed on the frame of thetester, which indicates the distance between the grips.

The frame of thetester fabricated from heavy mild steel sections to give the required rigidityand strength. Various built in safety arrangements such as over travelprotection are provided.

The tester isfinished in metallic painting and bright chrome| zinc plating to give theapparatus a corrosion resistant finish. It is supplied complied whichelectrical. Which include micro-, switches, Push buttons, and contactors forsafe and convenient operation. 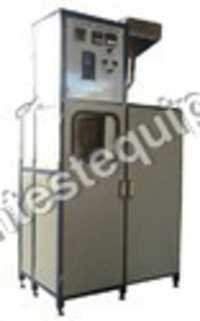